How Gregg Wallick Built a Sales Machine at Best Roofing 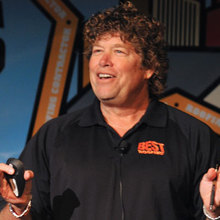 Prior to purchasing Best Roofing in 2001, Gregg served as the President & CEO of GRI then transforming into General Roofing Services. Under Gregg’s leadership, General Roofing grew from a start-up in 1987 to the largest roofing contracting company in the United States at his departure in 2001.

Professionally, Gregg has served as the past director of the National Roofing Contractors Association and retains his contractor licenses in the roofing field. Gregg and his team of Forensic Roof Specialist are considered the “Go to Guys” when it comes to solving difficult roofing and waterproofing problems. Gregg is certified by the State of Florida Department of Professional Regulations to teach classes to licensed and certified property managers on how to make roofing decisions. Gregg frequently lectures at trade shows and has been published in numerous trade journals about roofing and business practices. Gregg and his team at Best Roofing have long been active supporter of many non-profit organizations in the South Florida community. Gregg currently serves as Chairman of the Board of Trustees for Keiser University and Everglades University. Recently Gregg received the “Father of the Year” award from the American Diabetes Association. Gregg has been a member of “Vistage”, a CEO continuous education organization that meets monthly since 1990.

Gregg is also the Founder & Chairman of FollowUp Power, an SaaS (software as a service) sales automation and sales coaching company. FollowUp Power was originally built to automate and coordinated the sales efforts of Best Roofing. After many years of development, FollowUp Power became commercially available to the specialty contracting community.

Gregg attended the University of Miami on a football scholarship and earned both his undergraduate degree in business administration as well as his MBA. In his senior year his teammates elected him as the defensive team captain. Gregg also served as an assistant coach for the Hurricanes for two years. Gregg believes that the principles, beliefs and ambition he acquired competing in sports are the life lessons that has allowed him to successfully compete in the business world.

Gregg is especially proud of being a husband and raising six children with his wife Liz. Gregg, Liz and their last child at home Mollie, along with three dogs, and four cats and a mongoose live in Fort Lauderdale Florida.